Building linguistic bridges: from Classical to Modern languages is an eTwinning project consisting of an online  course of Spanish and  Greek  languages,  completely designed, implemented and evaluated by students. Greek and Galician pupils will produce all the teaching materials.
Students are going to use, as a starting point, their knowledge of classical languages, in order to teach their peers a  modern language  (Greek and Spanish).
Spanish students will teach Spanish to the Greek students using their knowledge of Latin, while Greek students will teachmodern  Greek to the Spanish students using their knowledge of ancient Greek.
English is going to be the communication language during the project.
ICT students  will cooperate in order to develop and improve the project.
Our project aims at improving our pupils’ linguistic and digital competences.
Students will develop their ancient Greek and Latin knowledge in order to become good modern language teachers for  their  eTwinning partners, who cannot speak neither Spanish nor modern Greek at the beginning of the project.
It is expected that the students will reach a basic comunicative competence in the eTwinning partners language and  understand the  importance of language and cultural diversity, as well as the common European cultural background.
Two school exchanges will be held during the eTwinning project.
During the visits, we will celebrate the European  Year of  Cultural Heritage. 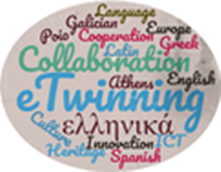